MFRNDZ said:
Wondering form the guys who did the swap with the VMX 2.5*19"/4.25*17" Cush Drive Tubeless For BMW How are these wheels holding up?

hey, the bike i have is 2018 uk model, the vmx wheels are holding up well, but like any other cross spoked wheel, the rims are slightly extruding and if you ride on loose rocky road a lot, inevitably at some point the rock will hit the rim and chip the metal off.
I got those kind of damage both on my r1200gs and g310gs (vmx wheels).

· Registered
Joined Nov 3, 2021
·
2 Posts
Thanks a lot for the detailed response! they seem like a solid product.

JerryG said:
I get that, but It really does boil down to your saying "you need to love you (sic) bike". In college, I bought my first bike, a Honda CB750 and kept it until I bought a Honda GL500 Silver Wing as a graduation present for myself. I added a 250 for off-road (TS, then a YT) while I was in Hawaii on Oahu; riding the sugar cane and pineapple fields was a blast. Before I returned to the continental US, I traded my way from the GL500 to my first BMW, an R100/7. When I returned to the states, I brought the R100/7 and the YT250 with me, but my first experience off-road was dirt roads that had been deliberately strewn with roofing nails. That took the air out of my tires and the wind out of my off-road ambitions. From then until just six weeks ago, almost 40 years, I owned and rode only street bikes and, thanks to the quality I experienced with the R100/7, they were all BMWs. Yes, thanks to modern production methods, I know most modern bikes have comparable quality now, but that wasn't the case during the 80s and that left it's mark on me.

At this point, I have logged some 500,000 miles across 49 states in the US (Alaska is in my plans). When I retired, I knew I wanted three bikes, a sport-touring bike, a sport bike, and an adventure bike. After the R100/7, all my bikes have been inline 3 or 4 cylinders and I've gotten addicted to their smoothness. So, I ended up with an S1000XR for sport-touring (165 HP, 498 lbs), an S1000RR for sport (199 HP, 459 lbs), and an empty spot in the garage for the adventure bike. To me, an adventure bike should be light enough to be OK off-road and comfortable enough to OK on-road for at least moderate distance days, say 300-500 mile days. All of BMW's serious adventure bikes were 500-600 pound behemoths that I had no desire to load up and try taking off-road and their only sub-400 pound adventure bike was really a misnamed street bike whose wheels and suspension where designed for rough roads, not off-road. For the first time in almost 40 years, I started looking outside BMW; I came close to buying a Husqvarna 701 and very close to buying a Honda CRF300 Rally. A friend who had the 701 convinced me against going that direction. Most of the reviews on the CRF300 said it was a dirt bike that was OK on the road, but not so much for the distances I was envisioning. On the other hand, most of the reviews of the G310GS said it was a street bike that was meh off-road, but those reviews came with an interesting caveat, the G310GS could be upgraded to be a real sub-400 lbs GS.

So, that's what I've done, I've created a very comfortable, light, nimble GS that, a couple weeks ago, the lead instructor at the BMW Rider Academy said was "killing it" during their Two-Day Adventure Course. Yes, the R1250GSs and GSAs where doing the same drills, but my G310GS did them with an ease that only comes with being 150-200 pounds lighter than the 1250s, especially for someone who is 62 and planning to ride until I'm 84. As far as I'm concerned, this is what BMW should have produced when they built the G310GS, but didn't because it would eat into sales of their more profitable behemoth GSs. So, that's my answer to your "Why?" But, I'm only six weeks into this adventure and if it works, great; if it doesn't, I'll sell it and try something else while filing away the new memories it's given me.

Sorry if I've bored anyone, but you did ask. Smile side up, everyone! 😃
Click to expand...

Fantastic..... love this....as I'm about to buy my first bmw and yes it will obviously be the GS310, And I'm riding it and shipping it to tour all of Australia first, then Will continue all RTW...im leaving my 1200 Custom HD at home, and I lost my Kawasaki 350? I think it was in a wildfire...I only owned it a week... so there's that, and you bet I'm gonna do her up right for those trips...

· Premium Member
Joined Jan 7, 2022
·
614 Posts
Update: I'm very happy with my VMX wheels. I currently have about 5,000 miles on them and I'm in the Nova Scotia part of a trip from North Carolina to Missouri to Nova Scotia and back to North Carolina. The trip included about 60% of the North East Backroads Discovery Route, including some seriously gnarly parts, and I'm currently running around Nova Scotia's abusive frost heaved roads and some of their even more abusive off-road offerings. The rims are absorbing all this and asking for more. (P.S. Before I wrote this, I went out and inspected both rims and they look perfect other than some mud and dirt from the last two days of riding.)

· Registered
Joined 4 mo ago
·
12 Posts
Thanks to this exact thread and to all of OP's fantastic information regarding the back and forth with the company. I went down a similar back and forth over email and was able to acquire my Gold/Blue VMX wheels from their California warehouse with two extra sets of cush drive rubbers!

· Registered
Joined Sep 2, 2021
·
17 Posts
I wanted to give an update to my experience with these VMX cross spoked rims. I'm very happy with them. In late April I attended Bill Dragoo's L1-2 and L3 training. Everything from highway, sod, mud, sand, rocks, even fell in a creek. No problems at all with the rims. They held tire pressure, took a beating, and got a lot of compliments.

Last month took the bike to the Big Bend area where I beat the crap out of it and the rims. Lots of large rocks, deep gravel, even some surprisingly deep mud. When in the smaller rock sections I heard rocks hitting spokes a lot. I think the final test was coming over hill too fast, not scrubbing my speed on the downhill side fast enough and hitting a massive rock with my front tire sending me and the bike down for a hard slide. Not a single scratch or ding on the rims after that.

The only scratch I have is from my tire iron and clumsy hands putting the tires on the first time. The powder coating will come off so be careful changing the tires. But, I don't think that's a specific issue with these rims.

I'd buy these again in a heartbeat.

DAAT said:
Good, this is mine with OEM bmw wheels from f650gs.
Click to expand...

What adjustments did you have to do to fit these?

JerryG said:
Update photo: As far as I could go on White Point, Nova Scotia...
View attachment 17233
Click to expand...

Hi, I recently bought a G310GS and I'm new to the forum as well, I know this is an old thread but I found it when researching the VMX wheels, your advice has been great and I've reached out to them directly to try to get them shipped from the US instead of China.

I was curious as I couldn't find anywhere if you've been asked this before, if you don't mind me asking, what crash bars/defenses are those in your motorcycle? They look solid and I'm struggling finding good crash bars for my bike.

anjim19 said:
Hi, I recently bought a G310GS and I'm new to the forum as well, I know this is an old thread but I found it when researching the VMX wheels, your advice has been great and I've reached out to them directly to try to get them shipped from the US instead of China.

I was curious as I couldn't find anywhere if you've been asked this before, if you don't mind me asking, what crash bars/defenses are those in your motorcycle? They look solid and I'm struggling finding good crash bars for my bike.

anjim19 said:
what crash bars/defenses are those in your motorcycle? They look solid and I'm struggling finding good crash bars for my bike.
Click to expand...

Welcome to the thread, the forum, and 310GS ownership. 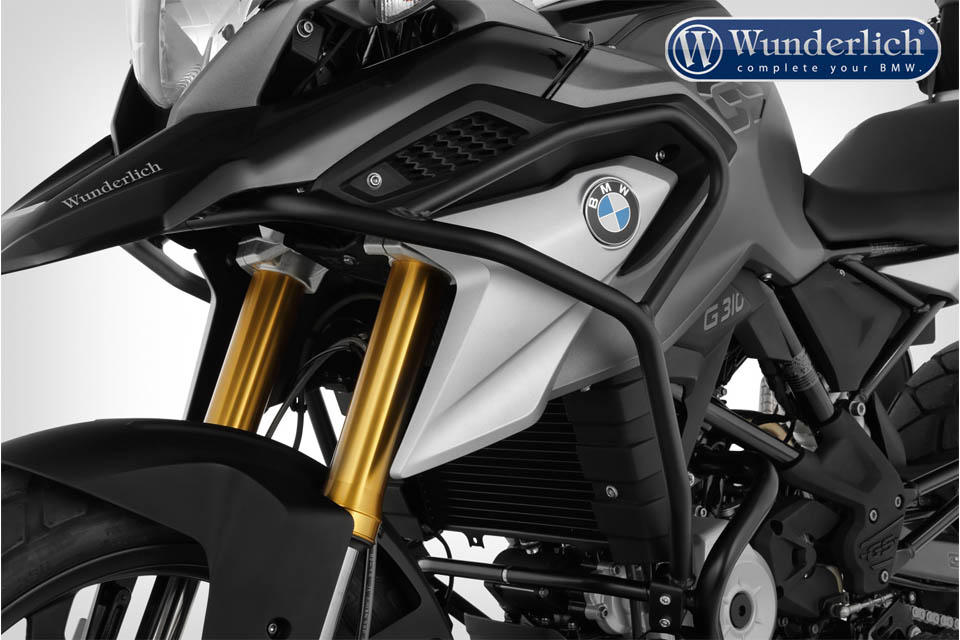 However, they're not made for each other. You can read and see what I did to make them work together here:

I purchased the BMW OEM crash bars. Took 25 minutes to install. The package arrived without any instructions, so I did a search on youtube. The only tricky part is getting the bolt inserted and threaded on the right side above the radiator hose. It's easier if you detach the hose (get ready for...

In fact, you should read that whole thread to see the other options.

Your comment made me check, thanks. I have over 10,000 miles with the RR engine guard on my bike, but I've also had Rally Raid's Level 1 fork kit that whole time (stiffer than OEM). Based on the wear pattern on the leading edge of my RR engine guard in the picture below, I think my tire has been touching my RR engine guard, but not significantly. On the other hand, I've hung up hard on enough rocks to positively know the RR engine guard has saved me from engine damage. On the third hand, without a stiffer front suspension, like my RR Level 1, I can see how the contact might be significant enough to cause problems.

· Registered
Joined 15 d ago
·
15 Posts
As I understand shipping only is from US. No sites with wheels from EU or China ?

· Premium Member
Joined Jan 7, 2022
·
614 Posts
You'd have ask them, trying emailing them from their web site if my contact doesn't reply...